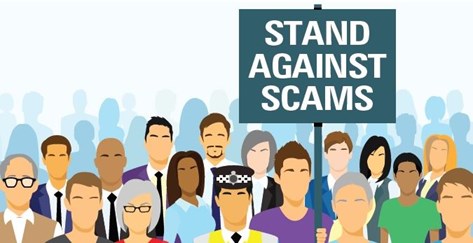 Scams Awareness Month 2018 is taking place throughout the month June. Partnership work is key to this campaign. Both locally and nationally, we have seen the biggest impacts when working together with other organisations to spread the message and increase the effectiveness of our engagement with the public. This briefing has been created to provide you with the information on how you can get involved in this year’s campaign. Further details will be available in the coming weeks.

Scams Awareness Month is an annual opportunity to raise awareness and take a stand against the crimes and predatory practices which affect millions of people. Citizens Advice research shows that almost three-quarters (72%) of people surveyed had been targeted by scammers over a two year period (2015-2017). Over a third, had been targeted five or more times.

In order to increase the effectiveness and engagement of the campaign last year, a number of new approaches were implemented such as using behavioural insights, targeted communications strategies and folding in a user-needs approach. Evaluation for 2017’s campaign shows that not only was this new approach well received by partners and campaigners, it showed a marked increase in engagement of target groups such as young people.

This year’s campaign Following the success of last year’s campaign will be aiming to re-promote de-stigmatisation and encourage more reporting of scams. Scams are a growing problem. In the latest year figures from the CESW (Crime Survey England and Wales - year to Sept ‘17), there was a 7% increase in the number of fraud offences recorded in England and Wales (662,519) compared with the previous year. This continues the year-on-year increases seen over the last five years. The increase was largely owed to offences reported to Action Fraud, which rose by 18%.

While this may be attributed to the effectiveness of the awareness raising campaigns focus on reporting, it highlights the importance of Scams Awareness Month. There continues to be a need to encourage reporting and tackle the stigmatisation of being scammed.

This year's event will launch to the media on Friday 1 June with an official launch by the Minister at the CTSI Symposium on 4 June. The campaign will run for the remainder of the month. The proposed them is 'Don’t Miss a Trick, Be Scam Aware'.

There will be a a number of resources available to help engagement with the campaign.

Campaigner packs for local trading standards offices will include:

If you have any questions or for further information then please contact the CTSI press office at pressoffice@tsi.org.uk