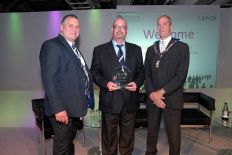 Truro carpenter Keith Bunt received a Hero Award at the Trading Standards Institute’s (TSI) Conference in Harrogate on Tuesday for his significant contribution to consumer protection.

It was while carrying out repairs on a property that Mr Bunt noticed several stacks of counterfeit DVDS, CDs and games. Choosing not to turn a blind eye, the housing association employee reported the illegal stash to Cornwall Council Trading Standards. It was through the evidence provided by Mr Bunt that a conviction was secured and the offender was sentenced to 12 months imprisonment on 29 August 2013.

TSI chief executive Leon Livermore said: 'As the recent TSI Workforce Survey shows, funding for trading standards services across England and Wales will decline on an average of more than 40% over the lifetime of this parliament. While we work toward a more consistent funding mechanism, heroes like Keith play a vital role in helping trading standards officers protect vulnerable members of the community.

“I am delighted to present Keith with a TSI Hero Award, giving him well deserved national recognition both at the level of the individual volunteers and at the collective trading standards level.”