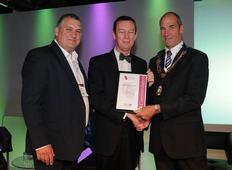 Press officer Murray Evans received a Hero Award at the Trading Standards Institute’s (TSI) Conference in Harrogate on Wednesday for the significant contribution he made to consumer protection in Kent.

When Mr Evans joined Kent County Council as a press officer in April 2013, he was only meant to be maternity cover. But with his background in marketing and journalism combined with a proactive approach, Mr Evans knew that trading standards had plenty of stories waiting to be picked up by the media.

Working hard to raise the profile of the profession, Mr Evans provided a platform for trading standards officers to reach the most vulnerable and at risk.

As a result of Mr Evan's hard work, Kent trading standards has been featured on BBC Radio 4's 'You and Yours' programme and BBC1's 'Fake Britain', as well as in local radio and newspapers.

TSI chief executive Leon Livermore said: 'As the recent TSI Workforce Survey shows, funding for trading standards services across England and Wales will decline on an average of more than 40% over the lifetime of this parliament. While we work toward a more consistent funding mechanism, heroes like Murray play a vital role in helping trading standards officers protect vulnerable members of the community.

“I am delighted to present Murray with a TSI Hero Award, giving it well deserved national recognition both at the level of the individual volunteers and at the collective trading standards level.”

Main Conference sponsor
END
Notes for Editors:
Photo from left to right: TSI CEO Leon Livermore, Murray Evans, TSI Chairman John Peerless
For real time updates on what's happening with trading standards, follow our blog at http://tradingstandardsinstitute.wordpress.com/
Trading Standards Institute (TSI)
TSI is a training and membership organisation that has represented the interests of the Trading Standards profession since 1881 nationally and internationally.  We aim to raise the profile of the profession while working towards fairer, better informed and safer consumer and business communities.
TSI’s members are engaged in delivering frontline trading standards services in local authorities and in businesses.
www.tradingstandards.gov.uk @tsi_uk