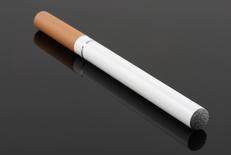 A new report published today and released at TSI's annual Conference, reveals the results of a test-purchasing study involving young people aged under 18 attempting to buy e-cigarettes and related products from a variety of retailers.

Whilst there is currently no legal restriction placed on the age at which e-cigarettes may be sold, the majority of these products carry a voluntary age warning that they are not for sale to under 18s. New powers in the Children and Families Act 2014 allow for the introduction of a ban on selling e-cigarettes to under 18s. These regulations are subject to future consultation and this report was commissioned by Public Health England to assist this work.

Of 574 visits made by young people in March 2014, successful purchases were made on 227 occasions (40%). The highest proportion of purchases to visits made was from market stalls (80%) followed by independent pharmacies (74%).

The majority of products sold (80%) carried warnings that these products were not for sale to under-18s.

Where retailers refused a sale, a range of reasons were given, including refusal following a proof of age request or outright refusal to serve a young person.

Whilst there are concerns that young people could use e-cigarettes as a gateway into tobacco, the same survey found no evidence of this. E-cigarette use by young people was found to be concentrated with those who had already started smoking tobacco. Less than 2% of under-18s surveyed reported using e-cigarettes monthly and less than 1% of never-smokers reported having tried them ‘once or twice’.

“Public Health England is committed to maximising the benefits and managing the risks of e-cigarettes. With effective and appropriate regulation, we believe these products can have a real and lasting benefit to public health by helping people to quit tobacco.

“However, we are aware of concerns about young people’s access to e-cigarettes. The report finds that, despite age of sale warnings, many retailers are selling e-cigarette products to young people. This is unacceptable.

“This study shows that the Government and regulatory authorities need to work closely with retailers in advance of any regulations to ensure that retailers are aware of their legal responsibilities.”

TSI Chief Executive Leon Livermore said: 'This collaboration with Public Health England is an excellent example of how trading standards and TSI are working to protect the health and wellbeing of consumers, in this case particularly young consumers. This study has highlighted that trading standards has an important role to play in preparing businesses for the change in the law and to ensure that these products are not supplied to under 18s.'

For further information, to arrange an interview please contact the Trading Standards Institute on 0845 6089439 or pressoffice@tsi.org.uk

1.Public Health England’s mission is to protect and improve the nation’s health and to address inequalities through working with national and local government, the NHS, industry and the voluntary and community sector. PHE is an operationally autonomous executive agency of the Department of Health.

2.The research was developed and managed by the Trading Standards Institute on behalf of Public Health England

3.There is currently no restriction placed on the age at which e-cigarettes and related products may be sold. However, this situation is likely to change with new powers provided for in the Children and Families Act 2014.

4.The Regulation of the age of sale of E cigarettes and other nicotine containing products is included in Section 92 of the Act and allows for the Secretary of State to make provision prohibiting the sales of nicotine products to persons under the age of 18 years, and for an offence to be created if a sale takes place.

5.The enforcement of any future Regulation is likely to be the responsibility of Local Trading Standards Services. Trading Standards services are already responsible for legislation pertaining to a wide range of age-restricted products including tobacco, alcohol, knives and solvents and thus have the experience of working with such legislative requirements.

6.This research has been designed to capture a “snap shot” of the current retail arrangement.

7.Each participating authority was advised by the TSI of their visit allocation up to a maximum of 25 visits per authority. All visits were scheduled to take place between the 15th and 31st March 2014. At each visit to a retail premise, an under 18 year old volunteer was tasked with the attempt to purchase a nicotine containing product as instructed by Trading Standards.

Attempts to purchase and purchases

Total sales refused and total sales made by premise type