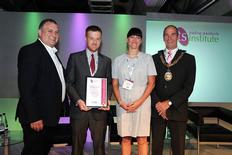 Michael Hall, a retired police officer, received a Hero Award at the Trading Standards Institute’s (TSI) Conference in Harrogate on Thursday for the significant contribution he made to consumer protection in North Yorkshire.

When Mr Hall's 84-year old aunt, Kit Gardener, was defrauded of at least £6000 in 2010, the impact rocked the family. An organised crime group targeted Ms Gardener, taking her money for roofing work which was valued at no more than £25. After contacting North Yorkshire Trading Standards, Operation Herring commenced.

It was revealed through the operation that the rogue traders had targeted a second victim, defrauding him of £70,000. Four suspects were prosecuted for fraud and associated money laundering. Following guilty pleas in December 2012, the two main offenders were sentenced to three years and four and a half years respectively in February 2013.

Seeing how the scammers had damaged Ms Gardener's well-being, Mr Hall worked tirelessly to support the work of trading standards and helped to deliver trading standards' doorstep crime messages to the media. He took part extensively in local media coverage and was featured in ITV's 'Hunting the Doorstep Conmen'.

TSI chief executive Leon Livermore said: 'As the recent TSI Workforce Survey shows, funding for trading standards services across England and Wales will decline on an average of more than 40% over the lifetime of this parliament. While we work toward a more consistent funding mechanism, heroes like Michael play a vital role in helping trading standards officers protect vulnerable members of the community.

“I am delighted to present Michael with a TSI Hero Award, giving it well deserved national recognition both at the level of the individual volunteers and at the collective trading standards level.”