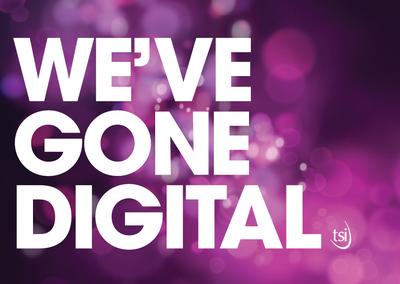 From the August issue, readers can view a new version of the magazine that is specially designed to look great on desktops, tablets and smartphones. A dedicated TS Today magazine app is also available in Apple’s App Store.

The new version of the magazine features a number of interactive elements including videos, audio content and pop-up ‘read more’ panels – all in an digital format that is easy to share with colleagues, members and other key stakeholders.

The August issue – which features a specially commissioned TSI Conference highlights video – can be accessed here.

You can also search for TS Today in Apple’s App Store to download the app straight to your Apple iPad or iPhone.

Meanwhile, from January 2015, TS Quarterly, a new high quality printed magazine, will be launched to reflect the changing role and influence of trading standards professionals.

It will feature a range of opinions, perspective and engaging features, as well as the best of the content from the monthly digital magazine.
Editor-in-chief Suzanne Kuyser explained: “After months of planning we are delighted to have launched the new digital edition of TS Today. We were determined to ensure that the digital version would look great on a range of platforms, and we feel this ambition has been achieved.

“For those with iPads and iPhones, the TS Today app is already available to download from Apple’s iTunes. An Android app will be released in the next few months.

“This first digital issue offers the chance for readers to feed back with their views on the new format – and we’re really keen to hear what you think.”

From now until December 2014, TS Today will appear in both print and digital formats. From January 2015, TS Quarterly will be published every three months, with TS Today continuing to be published monthly but in an online format only.

The magazine’s content will still largely be based on contributions from trading standards professionals, so submissions are still very much welcome. To submit a story to TS Today or TS Quarterly, email tstoday@tsi.org.uk