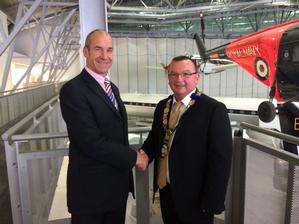 He said: “I feel immensely honoured and privileged to take up the role of chairman and have the opportunity to serve TSI members and the wider trading standards community.

“Times continue to be challenging and we need to look forward and face these challenges, not only by demonstrating our value and the important role trading standards plays to those around us, but by demonstrating to ourselves as individuals that our professional competencies are contemporary and that we can deliver.

“I look forward to promoting the great work being carried out by the profession, to meeting and discussing with members and non-members alike, our challenges and how we overcome them, and of course, in doing the best I can to take the profession forward.”

The Highlands trading standards’ team leader has 22 years’ experience which began as a trainee assistant enforcement officer in the Lothian region.

He later worked at Angus Council for 6 years, before moving to the Highlands where he has been team leader since 2010. His key areas of service delivery include weights and measures, petroleum, product safety, community safety and age-restricted sales.

A Trading Standards Practitioner, McGinty endeavours to demonstrate the important role the profession has, working collaboratively and sharing resources to best serve the community.

Throughout his career he has always been a supporter of TSI. Joining the Scottish Branch Executive in 2003, McGinty has been conference director, education secretary, vice-chairman, and chairman in 2008.

For the past six years he has been branch representative on TSI council, and is currently TSI council representative on the Qualifications and Awards Board, where he is passionate about his role in steering the direction of education and learning for future professionals.

Away from work, he enjoys the occasional game of football and golf, and also likes to travel – particularly on his motorcycle. A lifelong fan of Dundee United Football Club, he watches his team whenever he can.