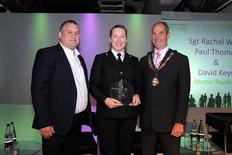 Three witnesses and an investigating police officer received a Hero Award at the Trading Standards Institute’s (TSI) Conference in Harrogate on Thursday for their significant contribution to consumer protection in the Kingsbridge area of Devon.

A business owner who cold called Kingsbridge residents in order to obtain work was subject to an investigation following concerns raised by residents and South Hams District Council, to neighbourhood beat officer PC Rachel Ward. One local resident handed PC Ward a leaflet after being cold called, and next to “specialist in” they wrote “conning old ladies” as they were concerned with their business activities.

The elderly witnesses provided vital evidence explaining the serious fraud Daniel Ward inflicted on his victims. It was this bravery, combined with PC Ward's ingenuity and skill, that saw the witnesses and PC Ward put up for a Hero Award nomination by Devon and Somerset Trading Standards service.

TSI chief executive Leon Livermore said: 'As the recent TSI Workforce Survey shows, funding for trading standards services across England and Wales will decline on an average of more than 40% over the lifetime of this parliament. While we work toward a more consistent funding mechanism, heroes like PC Ward and the witnesses play a vital role in helping trading standards officers protect vulnerable members of the community.

“I am delighted to present this group with a TSI Hero Award, giving it well deserved national recognition both at the level of the individual volunteers and at the collective trading standards level.”

Cabinet member with responsibility for trading standards in Devon, Roger Croad, says: “I would like to extend my thanks and appreciation to both residents, officers and police who all played their part in this investigation. This was undoubtedly a stressful and unpleasant experience for victims concerned. The fact that they were able to overcome their fears and give evidence was essential in achieving a successful result. Not only does it send out a message to the perpetrators of such crimes, it demonstrates excellent working practice both by the trading standards team and our partners.”