National campaign will target adults who give cigarettes to children 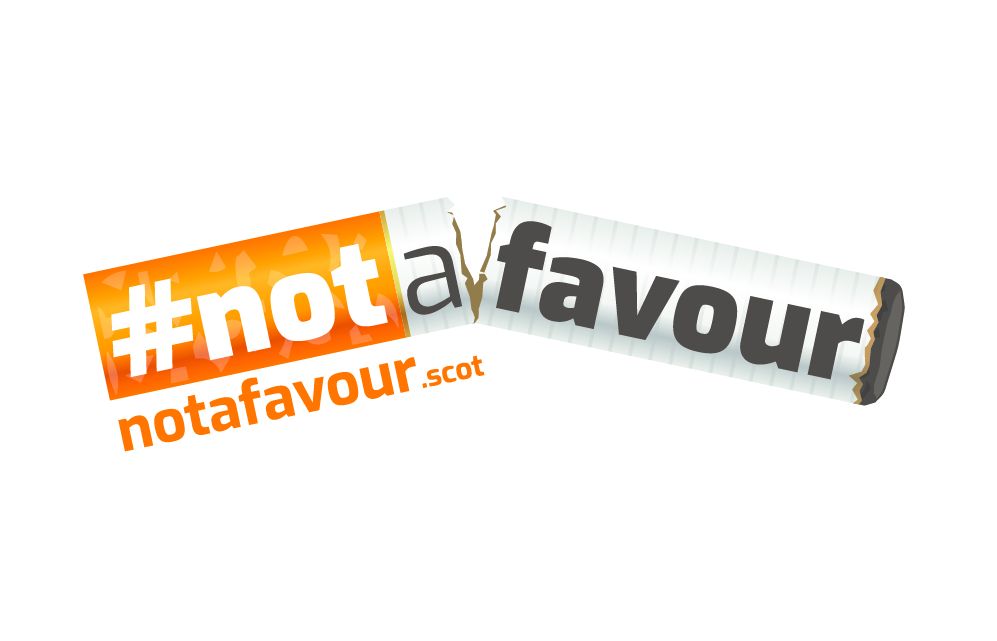 The latest chapter in Scotland’s drive to reduce the harm caused by smoking will target adults who buy cigarettes for young people.

Following a number of successful actions, including banning tobacco advertising, price increases and raising the age of purchasing cigarettes to 18, the proportion of young people in Scotland who smoke has fallen to the lowest level since surveys began. Yet 36 young people under 16 still take up smoking every day in Scotland.

Most children who smoke get their tobacco from friends, family and other people they know. Often these adults think they are “doing them a favour”. In response, the #notafavour campaign will make it clear that helping anyone under-age to get hold of cigarettes is helping them into addiction, ill health and financial problems.

The campaign has been developed by Action on Smoking and Health (ASH) Scotland, with Scottish Government funding and strong support from Trading Standards representatives. A new campaign website – www.notafavour.scot hosts a range of free campaign materials for use locally by trading standards, retailers, health and community groups and others.

“We know that young people get hold of cigarettes mainly from their family and friends.  That’s why it’s important to target this group and remind them that smoking can lead to health, money and addiction problems.

“We also know that the younger people start smoking, the harder they find it to give up later in life, so we really want to keep tobacco out of the hands of young people.

“We all want the best for our children and young people, and this campaign serves as a reminder that an easy-going attitude towards the culture of supply to children has got to stop.”

“Most people who smoke started as children, and the great majority now say they regret it. We want to see a Scotland where the only people smoking are the small number of informed adults who actively choose to do so. That means getting everyone to understand that we should keep tobacco out of the hands of young people.”

Peter Adamson, Chairman of SCOTSS, the Society of Chief Officers of Trading Standards in Scotland, said:

“There are good reasons why it is illegal to sell cigarettes to under-18s. Adolescents get addicted to nicotine faster than adults do, and so find it harder to escape the health problems and financial costs from smoking.”

Local organisations have already placed orders for tens of thousands of campaign postcards, posters and flyers, that will soon begin to appear in venues across Scotland. Other plans underway to promote the campaign messages include promotion at petrol pumps, bus adverts and pavement stencils.

For further information, or to indicate interest in or attendance at the photo opportunity, contact ASH Scotland on 0131 225 4725 or enquiries@ashscotland.org.uk Out of office hours – 07776 142 299

From 17:10 to 18:00 on Thursday 9th November Aileen Campbell , Sheila Duffy and a representative from SCOTSS will join young people from across Scotland for a photo opportunity with large boards highlighting the campaign logo. They will also be available for interviews regarding young people accessing tobacco.

The event will take place in room TG 20-21 of the Scottish Parliament and young people from the Landed youth service in Lanarkshire (http://www.landed.info/), the Ripple youth project in Edinburgh (http://rippleproject.co.uk/) and the Young Leaders peer education programme in West Dunbartonshire (https://www.facebook.com/Wdcyouthalliance/) will attend.

A range of visual materials is available free to download from www.notafavour.scot

ASH Scotland is the national charity taking action to reduce the harm and inequality caused by smoking. See www.ashscotland.org.uk

Information on young people and smoking in Scotland can be found on the ASH Scotland website - https://www.ashscotland.org.uk/media/5862/5youngpeople.pdf