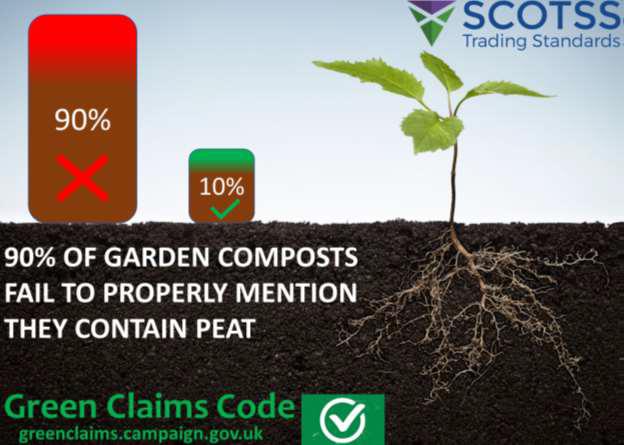 As the COP26 UN Climate Change conference draws to a close this week in Glasgow, Trading Standards officials in Scotland have revealed details of a national project looking at the peat content of garden compost in response to increasing environmental concerns and the introduction of new Competition and Markets Authority (CMA) guidance on misleading environmental claims – the ‘Green Claims Code’1.

Peat can be legally incorporated into garden compost, but its use will be banned from 2024. The UK’s
peatlands store three times as much carbon as its forests and in Scotland they form more than 20% of total land cover and actively remove and store carbon from the atmosphere as well as supporting the natural environment more generally.

The SCOTSS project was influenced by recent Royal Horticultural Society (RHS) research2 which found that “more than half of gardeners (57%) admit to not knowing what is in their shop-bought potting compost” and the RHS advised “If the bag doesn’t say peat-free then it most likely isn’t”.

“Garden compost containing peat is currently a legal product but most consumers buying compost are
not aware of the potential environmental impact nor that many even contain peat. Last month Trading
Standards Officers visited retailers across Scotland and examined over 300 bags of compost on sale across Scotland, some containing as much as 90% peat.”

“Officers found that 90% of the garden compost containing peat did not mention this fact prominently
on the product. Peatlands are a powerful natural means of extracting and storing carbon from the
environment. Their destruction to use the peat in compost therefore has an adverse impact on our
environment, hence the impending ban from 2024. To make an informed choice, consumers need to know to what degree, if any, peat is an ingredient of compost before they choose to buy a product. In the case of most garden compost containing peat sold in Scotland this does not appear to be the case.”

“Officers in Scotland have done excellent work at a time when government and citizens are seeing environmental issues as their number one priority. Consumers have the right to know important information about products before they buy them and failing to highlight the presence of peat on the front of a bag of compost means they are being misled and might make a different decision if it was correctly marked. The onus is on businesses to ensure their labelling is clear as to what is in these products. Only then can consumers make informed choices.”

SCOTSS will issue guidance to Scottish Trading Standards Officers highlighting the findings of the project to allow them to better advise producers and retailers on their responsibilities where issues were found with their products. Officers take a ‘4 Es’ approach where potential non-compliance is found, Engaging with business to Explain the law and Encourage compliance, only taking Enforcement action as a last resort.

Notes for Editors:
For press queries and further details on this project, email Ken Daly, SCOTSS Coordinator at
coordinator@scotss.org.uk or call 07720538349

1. The Society of Chief Officers of Trading Standards in Scotland (SCOTSS) represents the 31 local
authority Trading Standards services in Scotland. SCOTSS was established in 1996 and helps support
and coordinate the activities of Scotland local authority trading standards teams. It is a Scottish
Charitable Incorporated Organisation SC047951 and works closely with other governmental and
regulatory organisations, such as the Competition and Markets Authority, the Office of Product
Safety and Standards, Trading Standards Scotland, and the Scottish Government

2. Trading Standards Officers in Scottish councils advise on and enforce laws that govern the way
we buy, sell, rent and hire goods and services. Local authorities carry out inspections and monitor
or investigate complaints, they work with businesses to help achieve compliance but ultimately,
can instigate prosecutions or take civil actions against those who break the law. TSOs have been
deeply engaged in work around the Covid pandemic and are also at the frontline in dealing with the
changes arising from Brexit.

3. In the absence of product-specific regulations, for instance toy safety labelling, general
consumer protection law enforced by Trading Standards can be applied to commercial practices,
such as the marking of compost bags. Consumer protection law makes clear that consumers are
entitled to receive the information which the average consumer needs, according to the context, to
take an informed transactional decision. If they don’t receive the information, this is referred to as
a ‘misleading omission’. An omission will be misleading if the average consumer would be likely to
make a different decision about the product than they otherwise would if the material information
had been included. A misleading omission does not have to cause consumers to make decisions
that they otherwise would not. It is enough if the omission is likely to have that effect. The CMA
have produced guidance on these consumer protection laws as they apply to environmental issues,
expressed to the public as the ‘Green Claims Code’.

4. Why is Peat Bad? The United Nations Environment Programme (UNEP) state that:
“Peatlands are a type of wetland that occurs in almost every country on the globe. They store vast
amounts of carbon—twice as much carbon as all the world’s forests. By conserving, protecting and
restoring peatlands globally, we can reduce emissions and revive an essential ecosystem that
provides many services, for people, the planet and the climate—including their vital role as a
natural carbon sink.” www.unep.org/news-and-stories/story/peatlands-store-twice-much-carbon-all-worlds-forests

The Scottish Government state that:
“Peatlands are a key part of the Scottish landscape, our cultural and natural heritage, forming more
than 20% of Scotland’s land cover. In good condition, they actively remove and store carbon from
the atmosphere, support habitats and species and help to improve water quality and manage flood
risk. When degraded, peatlands no longer provide these benefits and emit more carbon than they
remove, becoming a net source of greenhouse gases.”