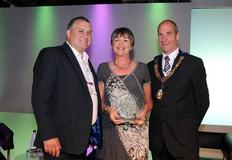 Linda McAuley received a Media Hero Award at the Trading Standards Institute’s Conference in Harrogate on Wednesday for the significant contribution she made to consumer protection in Northern Ireland through the 'On Your Behalf' show on BBC Ulster.

The radio show regularly blends consumer advice, information and education with robust confrontation of unfair trading, with an excellent record of naming and shaming rogue traders, and rectifying the problems created by these traders.

Linda is an advocate of trading standards, fully supporting the Northern Ireland Young Consumer Competition where she has acted as a question master for the event.

TSI chief executive Leon Livermore said: 'As the recent TSI Workforce Survey shows, funding for trading standards services across England and Wales will decline on an average of more than 40% over the lifetime of this parliament. While we work toward a more consistent funding mechanism, heroes like Linda play a vital role in helping trading standards officers protect vulnerable members of the community.

“I am delighted to present Linda with a TSI Hero Award, giving it well deserved national recognition both at the level of the individual volunteers and at the collective trading standards level.”