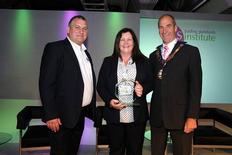 Carer Lyndsay Taite received a Hero Award at the Trading Standards Institute’s (TSI) Conference in Harrogate on Thursday for the significant contribution made to consumer protection in Lincolnshire.

Ms Taite, an AGE UK carer, took part in Operation REPEAT, a project aimed at raising awareness of doorstep crime prevention run by Lincolnshire trading standards, Lincolnshire police and Community Lincs, where she learned to identify bogus callers and rogue traders who target the elderly. This training served Ms. Taite well eight months later when she used the knowledge and skills she learned to assist a 93-year old client.

It was later revealed Ms. Taite’s client had been subjected to five years of visits from suspected rogue traders and had become fearful of not paying the sums demanded of him even when he knew no work had been carried out.

Thanks to Ms. Taite’s swift and brave reaction to what she witnessed at her client’s house, police have made a number of arrests in relation to various cases.

TSI chief executive Leon Livermore said: 'As the recent TSI Workforce Survey shows, funding for trading standards services across England and Wales will decline on an average of more than 40% over the lifetime of this parliament. While we work toward a more consistent funding mechanism, heroes like Lyndsay play a vital role in helping trading standards officers protect vulnerable members of the community.

“I am delighted to present Lyndsay with a TSI Hero Award, giving it well deserved national recognition both at the level of the individual volunteers and at the collective trading standards level.”