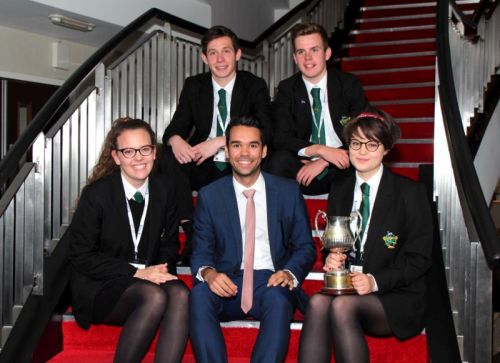 A group of schoolchildren have been praised by trading standards experts after they were announced as champions of a national competition that put young people's consumer knowledge to the test.

The students from Boroughmuir High School, Edinburgh, competed against three other schools from across the UK in the Young Consumers of the Year Competition (YCOY), in London.

The four students aged between 14 and 17 reached the final round of the two-day competition after scoring the highest points in a series of challenges and went onto claim victory as YCOY champions during the national final quiz.

Organised by the Chartered Trading Standards Institute (CTSI) and the Consumer Empowerment Alliance, the annual event is for schools and youth groups across the UK to test their consumer and financial knowledge.

Leon Livermore, CTSI chief executive, said: "Consumers will often come up against challenging situations in their everyday lives so it is important that young people in today's world are properly prepared to make the most informed decisions.

"The knowledge and understanding that these students have shown during the competition has been impressive and even put some of the trading standards officers and professionals in the room to shame."

"All of the students involved in this year's competition have been a testament to their school, congratulations to Boroughmuir High School on their win."

The winning YCOY students from Boroughmuir High School - Jessica McGhee, Clare Wilson, Henry Speir, Calum Mackay - won £1000 for their school, the Young Consumers of the Year Trophy and a £50 voucher each.

David Dempster, head teacher at Boroughmuir High School, said: “Winning the British final of the young consumer competition is a prestigious achievement and one we are very proud of indeed.

"This award is the result of a lot of hard work from our pupils and our young consumer coach, Alex Jones, from the City of Edinburgh services for communities department.

"We are delighted that our young people are as knowledgeable as they are about consumer issues and consumer rights and believe this to be a truly essential life skill for all young people.

"It’s an area that as a school we focus on every year and have had previous success in the Edinburgh, Scottish and UK finals.

"This most recent success confirms our belief that we are getting it right in our teaching of consumer issues to our young people. It is most certainly an area that all schools should be addressing.”

Now in its 30th year, the 2016 YCOY competition was sponsored by Experian, British Standards Institution (BSI), CTSI College of Fellows and the British Toy and Hobby Association (BTHA).

For the first day of the competition, students were invited on board a luxury charter on the River Thames to tackle three 30-minute challenges. There was then a national final quiz on the second day held at Novotel Hotel.